From the very beginning, I’d always wanted the music for CHOMP to be “practical”. I didn’t want it to feel like a soundtrack. I wanted it to give you the impression of reality–that the music might be playing on the TV or in the other room.  This gave me the opportunity to reach out to some of my favorite musicians to help bring the sound of CHOMP to life.

Claire and the Potatoes – “It’s a Beautiful Day”

The group Claire and the Potatoes was conceptualized by Marc With a C in late 2012, when he asked vocalist Leslie Rising to join him in recording a cover of The Little Girls’ “So Hard To Be True.” Pleased with the results, the duo recorded three additional covers and subsequently released the EP “The I Do In I Doubt”, billing it as sugary pop songs with boy/girl harmonies and an extra side of neurosis.

The following month, Marc approached Milk Carton Superstars’ Jim Myers about being the gigging drummer for the band. Soon after, Jim’s MCS cohort Guy Larmay joined in on bass. As Marc introduced original material at rehearsals, a true band dynamic emerged. This led to songwriting collaborations, and, by the end of 2013, the group had developed enough material for a full-length album.

“Have an Okay Time With Claire and the Potatoes!” is that album. Recorded by Marc and mastered by Justin Beckler, it features 11 original songs, steeped in a ’60s pop/rock aesthetic, that tell Claire’s story.

Currently portrayed by Leslie, Marc, Guy and Jim, Claire and the Potatoes are based in Orlando. They often play shows but are more than likely not coming to your town.

Make sure you check out their Bandcamp page.

The Director Says: Amazing things can happen making a movie. “It’s a Beautiful Day” was one of them for CHOMP. When the song was being written for their album “Have an Okay Time With Claire and the Potatoes”, there’s no way they could have known how perfectly the lyrics would foreshadow and underscore some of the creepiest and funniest moments in CHOMP. Sometimes things just come together perfectly.

The released version of “It’s a Beautiful Day” has the talented Leslie Rising on lead vocals, but for the movie, I also needed a version of the song with male vocals. Marc agreed to record a unique version of the song just for CHOMP. The results were–like I said in the beginning–amazing. 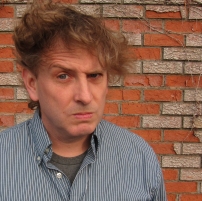 Trevor Strong is an Arrogant Worm, musician, and writer. His books include Very Grimm Fairy Tales, Get Stupid!, and Edgar Gets Going. He writes songs for anyone who will give him money. He is also Canadian, although when he says “sorry” he is not being nice but passive-aggressive.

About writing the song for CHOMP, Trevor said, “It is a joy to write something so short, especially when I didn’t even have to come up with the lyrics. I also like making zombie sounds, so this was a perfect fit for me.” Favorite zombie movie: Re-Animator.

The Director Says: When Trevor first sent me the “Dr Jon Croft Pit Bulls And Zombies Hour” theme song, I laughed so hard I started hyperventilating. Trevor’s sense of humor (or is that “sense of humour” since he’s Canadian?) and comedic timing allowed him to absolutely nail it.

I’d also like to add that I have been a huge fan of the Arrogant Worms for years. Once drove 5 hours across the state to see them perform. Could not be more tickled to have Trevor be a part of CHOMP.