Joel D. Wynkoop was incredibly kind and giving during the CHOMP shoot–and in this interview, so much so that I had to cut it in half. I’ll share the rest soon. So here it is, part 1 of my interview with Joel D. Wynkoop, who played Dr. Jon Croft in CHOMP.

Q: Why on earth did you agree to work with a new director on her very first short film? Are you insane?

A: I met Lynne many years ago and have been a friend and a fan of hers ever since. When she asked me to be a part of CHOMP I was honored. She has so much enthusiasm it is hard to say no. I gave her my all, and then some–coming back for re-shoots, ADR, whatever–to help see her dream become a reality. And I would do it all over again too. Lynne is a lot of fun to work for, she knows her vision and will see it through to the very end. Her script was also fun and I like doing something that is lighthearted but at the same time be a little scary so it was GREAT to be able to do CHOMP.

Insane? Yeah some say so, but not for working with Lynne. If you are EVER given a chance to work with her my advice is take it, she is an awesome lady and a great producer, director, writer, my hat’s off to you Lynne. (And yes, occasionally I wear a hat.)

Q: What was the hardest thing you had to do while making CHOMP?

Getting up in the morning to be on set on time. That’s it. It was a fun shoot. I learned my lines and Lynne even let me improvise a little which I love when a director will just let me run with the role. Working with Kyle Porter was also awesome. He is so talented and I was lucky enough to work with him again on the set of “Everyday Spooky”. The hardest thing I had to do was walk away when it was all over. Here’s hoping I can work again with Lynne in the future. It was a lot of fun.

Q: Tell me about something that went right while making CHOMP that surprised you.

A: The location was GREAT. Talk Wad Studios was a perfect location for Dr. Jon Croft’s TV show, thanks to owner Alex Wadsworth. I’d actually hosted my internet TV show there for years. On the day, it looked great. I even helped Lynne and Kyle put posters on the wall to help dress the set. It was awesome.

Q: Tell me about a time when you didn’t think CHOMP would ever get made, and how the challenge was overcome.

A: I think I knew it would always get done. I have been on sets before where I have said “This is never going to be completed,” but I knew Lynne had a vision and she was not going to let it NOT happen. Most of all was the completion date because ADR had to be done or some reshoots or some sound issues or music post stuff but I still knew Lynne was going to pull this off, there was no “Quit” in her vocabulary! It was no challenge for me. I stood by Lynne and told her “These things happen sometimes you just have to keep pressing on and everything will work out.” And they did!

Q: What’s one of the funniest thing that happened while making CHOMP?

A: Working with Kyle. He and I hit it off right away! At one point Kyle and I just went off on our own dialogue and Lynne never stopped us. In fact when we stopped she said, “What are you stopping for that was GREAT! Do it again!” That was the best!!! Kyle and I were having a BLAST and Lynne was enjoying it and I think even our sound guy was cracking up at our performance. The whole thing was a lot of fun for me and I think personally everyone involved!

Q: Why do you think people will like CHOMP?

A: It’s a fun story. It’s kind of scary in an innocent way. Does that make sense? Well yeah, look at Shaun of the Dead, scary but funny. It will make you laugh.

Susan O’ Gara who plays Millie is GREAT in this. She is very funny and plays her role to a “T”, taking it so seriously that it becomes funny. Also is the little star of this Ellah Durliat who also does a great job!

There really is something for everyone. You like to be scared? Then this movie is for you. You like to laugh? (And who doesn’t?) You’ll love this movie. Don’t take my word for it. Come see it at The Tampa Pitcher Show this Sunday, October 19th at 12:00 pm. It is going to be a zombie BLAST! 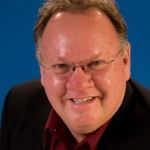 Joel D. Wynkoop has been acting…well since he was a little kid, but graduated into Super 8 movies in the 70’s. In the 80’s he teamed up with Tim Ritter to do Twisted Illusions–the movie and the company–followed by Truth or Dare, Lost Faith, Dirty Cop No Donut and over a hundred other films including Herschel Gordon Lewis’s The Uh-Oh Show. He’s also well-known for his TV shows, “Joel D. Wynkoop’s The Other Side” and “The Joel Wynkoop Show”  as well as countless TV commercials, infomercials, and stage plays. Joel Wynkoop has definitely paid his dues. He continues to act today wherever the movie takes him. Favorite zombie movie: George Romero’s Dawn of the Dead.

The Director Says: With all the experience Joel has, he went out of his way to make a first-time director feel at ease. Professional, funny and kind, he did everything possible to make “Chomp” a success, including bringing his own bazooka to the set!